The History of the Knackerman

Written by John Warman and used with permission

A Knackerman is a person who collects Dead, Dying and Injured farm animals and horses.

The trade of the knackerman was passed down from generation to generation, it was not a trade that you could go to college for, you had to learn the trade in a knackeryard. Unlike a slaughterman, a knackermen could process an animal from the start to finish, with many individual skills to learn like hanging the meat the right way up so the blood would drain out, it was a way of life that did not suit everybody! 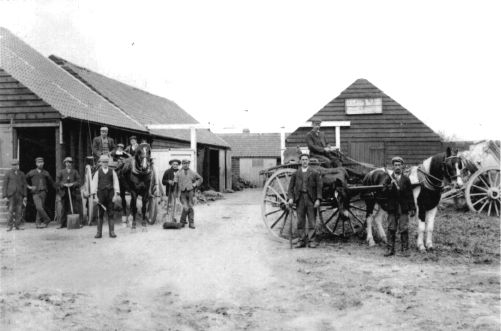 This knackers yard dates from the 1900’s

It must’ve been a very busy business with two knackercarts & all the workers. This site is now a housing estate. Can you spot the dead horse?

As far as I know Knacker Yards are unique to the United Kingdom. Years ago they were all over the country including towns and cities. In rural areas where there was a high density of cattle, knacker yards could be as close as four or five miles apart.

This was because getting the dead cattle to the knacker yard in the pre-motor vehicles age was a problem; the only way to move them was by horse & carts  and this cut down the area that a knacker yard could cover to only a few miles.

In later times knacker yards would often cover a radius of up to 50 miles. In villages, the local knacker yard supplied many things for the local community; horse oils were saved and boiled up, the local football club would come down and soak their boots in the oil to soften them up and the cricket club would use the oil to rub into their bats.

I know of one knacker man who used to make neatsfoot oil for the local doctor who used to rub the oil into her patient’s joints after coming out of plaster. Certain bones would be collected and sent to a knife manufacturer for bone handles. The remaining bones and waste would be boiled to remove all the fat which would be sold as tallow, the rest ground up and sold for fertilizer.

The hide would be sold to the local tannery, the meat would be sold for pet food going mainly to specialist cat food shops. These shops were mainly in the big cities and towns and didn’t disappear until the middle to late Sixties. 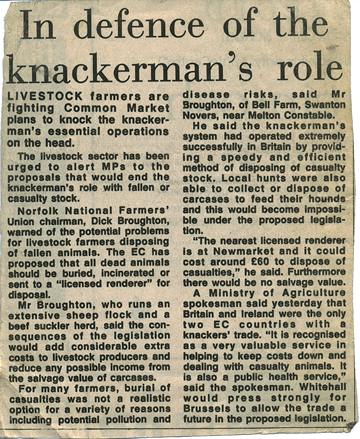 In the 1970s when there was still a great demand for knacker meat, I had three lorries that would go out early in the morning and would be out all day collecting casualty fallen stock. Most of the meat then would be sold to canneries with the best joints being kept back and sterilized. I sold this meat to Wembley Stadium when they raced greyhounds there, I also supplied the police training kennels at Chelmsford, the rest would go to pet shops & local greyhound owners.

Many knacker yards stopped processing the waste from dead animals because large companies were collecting all the bones and waste from slaughterhouses & knacker yards and it wasn’t viable for the smaller business to process gut and bone.

Nowadays it would be almost impossible for a knacker yard to start processing fat and bone again as rules and regulations and cost of starting up would be prohibitive. Nowadays it’s almost impossible to make a profit from an knacker yard as MAFF seem to be changing rules and regulations week by week. Most work comes from picking up casualty animals over 30 months old and taking them straight to a large incinerator to be burned, this is paid for by the Government. On the 1st July 2001, all cattle over 30 months – casualties or dead must be incinerated. 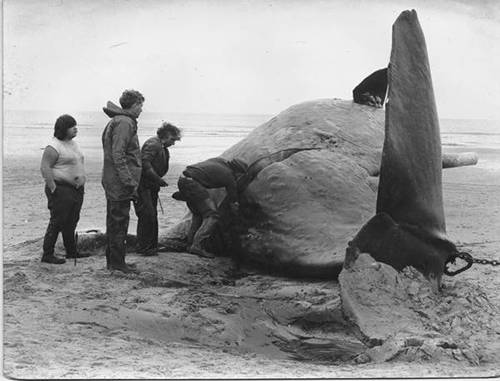 Knackermen have many uses, this picture was taken of John Baxter Knackerman cutting up a whale that was washed up on Holkham beach in Norfolk in the 1970s.

He was asked to remove this whale by the local Council.

The tail when laid out was 4.5 meters across. 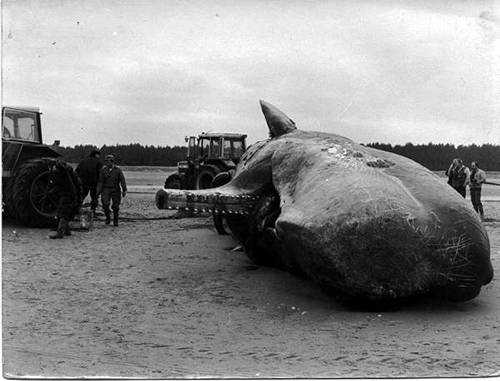 Another picture of the whale from Holkham Beach in Norfolk.

In the head of the whale is about 40 gallons of fluid, used in the cosmetics industry. John had the idea of knocking a 2″ pipe into the head and catching the fluid in a drum, when they did this it came out with such pressure that every body got covered in it but none was actually saved! 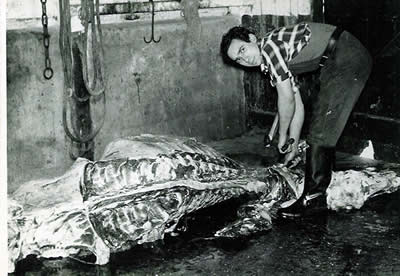 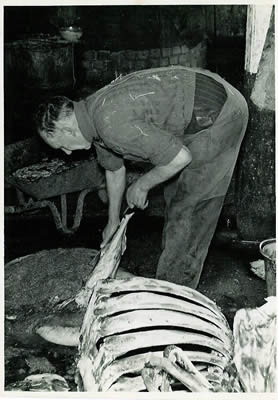 Up until motor transport was available, the horse and cart was the only way to transport dead cattle and horses. These knacker carts were specially built for the job, when a knacker man went to a farm to collect a dead animal he would take the horse out of the cart and tip it up in front of the dead animal’s head, he would then put a roller between the shafts of the cart this roller had a ratchet on it and would act as a type of winch to slowly pull the animal on to the back of the cart. He would then tip the cart up straight again, put the horse back in and go back to the knacker yard. 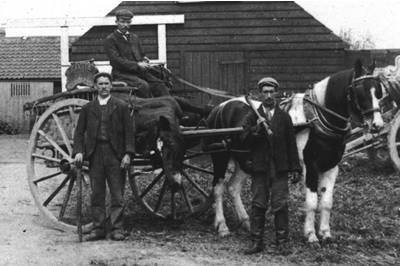 Look closely at this knacker cart, can you see the dead horses head hanging over the edge of the cart?

I wonder what people would say if I was seen going down the road like this now!

Notice the two men in front holding poleaxes. Poleaxes were widely used for killing animals in those days.

This one shown is a 35cwt van and can carry three cows.

When motor transport started being used, this revolutionised knackeryards.

The modern-day knackercart would have an electric winch and a sealed floor to keep all the liquids from a carcass from going on to the road. Many small knackersyards still use horse trailers or old vans though. 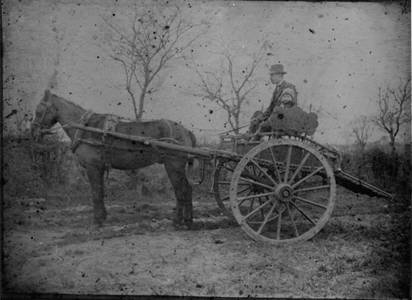 This rare picture was taken on a farm many years ago.

Knackercarts were part of everyday rural life & most people knew what they were, nowadays knackercarts go about their job and nobody knows… 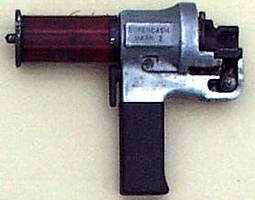 Bell Gun:This gun fires a .310 calibre bullet, you have to hold the gun on the animals head and hit the end with a wooden mallet, not easy when the animal is thrashing about. 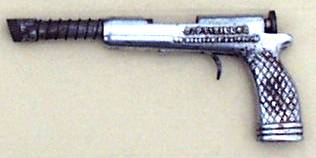 Bolt Gun mainly used in slaughterhouses for continual killing, safe to use as there is no bullet. It fires a cap which in turn fires a bolt out of the barrel about eight inches. In knackeryards they tend to seize up because they’re not used enough.

In the early days the by-product (Offal, bone, fat etc) from a dead animal was probably cooked in vats with the fat being skimmed off and the rest fed to pigs. When pressurized steam became widely used it was soon found that the waste cooked under pressure was a lot quicker process.

The modern day knackers yard employs many types of machinery to help reduce costs, provide an efficient service and to ensure the safety of staff. It’d be fair to say that modern machinery has made the lifting & handling of animal carcasses far easier than the days of old seen above.